According to The Color Purple, Nettie used the train in order to get to New York. While on the train, she realized for the first time of how a train looked in the inside, which involved beds, restaurants, and bathrooms. Nettie also talks about the segregation that was present on the train where blacks couldn’t use the beds and restaurants, while whites could use them and have better toilets than blacks. From arriving to New York via train, we learn about how Nettie discovers how blacks are different from the way she grew up in the south. She discovers how colored people have evolved by living in houses just as good or even better than whites. You could also say that New York was different from the South since segregation wasn’t that common in the North.
The source that I found contains information about the syllogism that Jim Crow Laws bring. Pertaining to this book, it mentions the syllogism about how blacks should not object to being separated on the trains by “just a small railing.” Having said that, this explains why Nettie never talks about her opinion throughout the letter to Celie about how unequal blacks are towards whites and how segregation shouldn’t be legal. This source also supports how the letters are narrated where Nettie is referring to whites in way that makes them superior. It also supports why she was so surprised when it came to the living environment since blacks do not live in a system that makes them successful.

Original document is out of copyright. Every effort has been made to comply with the provisions of any licensing agreements associated with digitization of the original document. 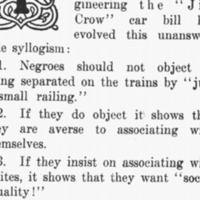